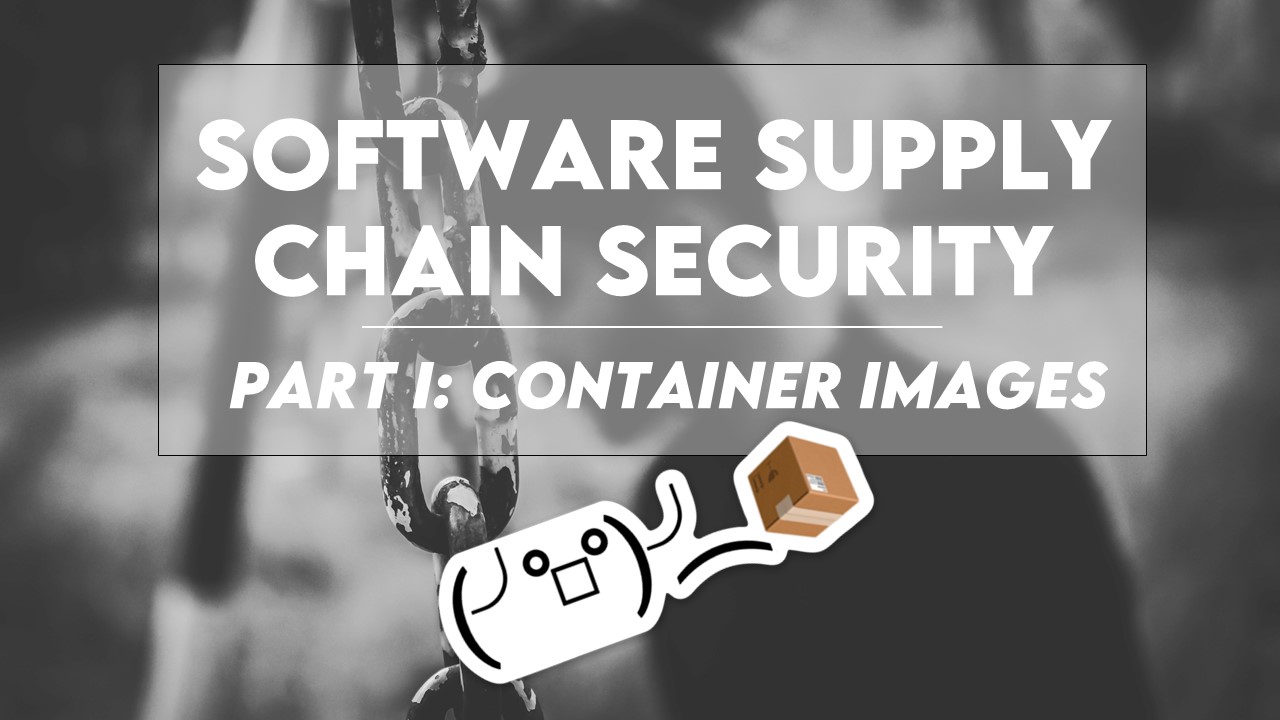 Problem : I need to package software

There are many tools to build container images, not just Dockerfiles. In fact, in large organizations, Dockerfiles are IMHO an anti-pattern. You need a tool that can 1) build images without Dockerfiles and 2) separates the OS from the app. Buildpacks and more specifically Paketo solve these, and other, problems.

If you get any one thing from this post, it’s important to understand what a container image really is. What it really is…is an open source specification that defines the “file bundle” that makes up what we call a “container image.” (Ultimately, at this time, a container image is a glorified tar file.)

This specification defines how to create an OCI Image, which will generally be done by a build system, and output an image manifest, a filesystem (layer) serialization, and an image configuration. - OCI

The reality is that anyone can build a tool that can create an image which meets this specification. Anyone. It does not have to be based on Dockerfiles. In fact I would suggest that while Dockerfiles are great they are not necessarily the best tool to use as part of building a secure software supply chain. There are other solutions, not many, but there are definitely choices that can be made (and I present one of them in this post).

First, what other tools are out there for building OCI compliant images?

NOTE: Not all of these tools are maintained, and not all would be usable in production. This is just a list to show that there are several tools one can use to build an OCI compliant image, not all of which use Dockerfiles. (However, that said, I don’t think there are quite enough tools to show the vibrant OCI image building ecosystem that one would expect given the popularity of containers.)

As can be seen from the above there are several tools which could be used, as opposed to “docker build…”. Each of these tools makes different architectural and usability choices. In fact some target only specific runtimes, eg. ko targets golang apps.

My opinion is that a secure supply chain requires that there is, effectively, preferably, no Dockerfile. In my opinion, there’s too much power in Dockerfiles, too many ways to make mistakes and create security issues to allow people to have access to them, or for them to even be available. Developers should not be spending time crafting Dockerfiles.

To me Dockerfiles are an anti-pattern, especially in large organizations with many applications. However, please don’t get me wrong: Dockerfiles have been and will continue to be an amazing tool for developers to build container images, bringing that capability to the masses. That said, using them as part of a secure supply chain is challenging…I believe too challenging for most organizations. It’s preferable for the image build tool to not use Dockerfiles or at least abstract (hide) them away from the developers and application ops teams. However, when hiding things in technology we know that issues can and will still leak out, so perhaps best to just not have Dockerfiles at all. 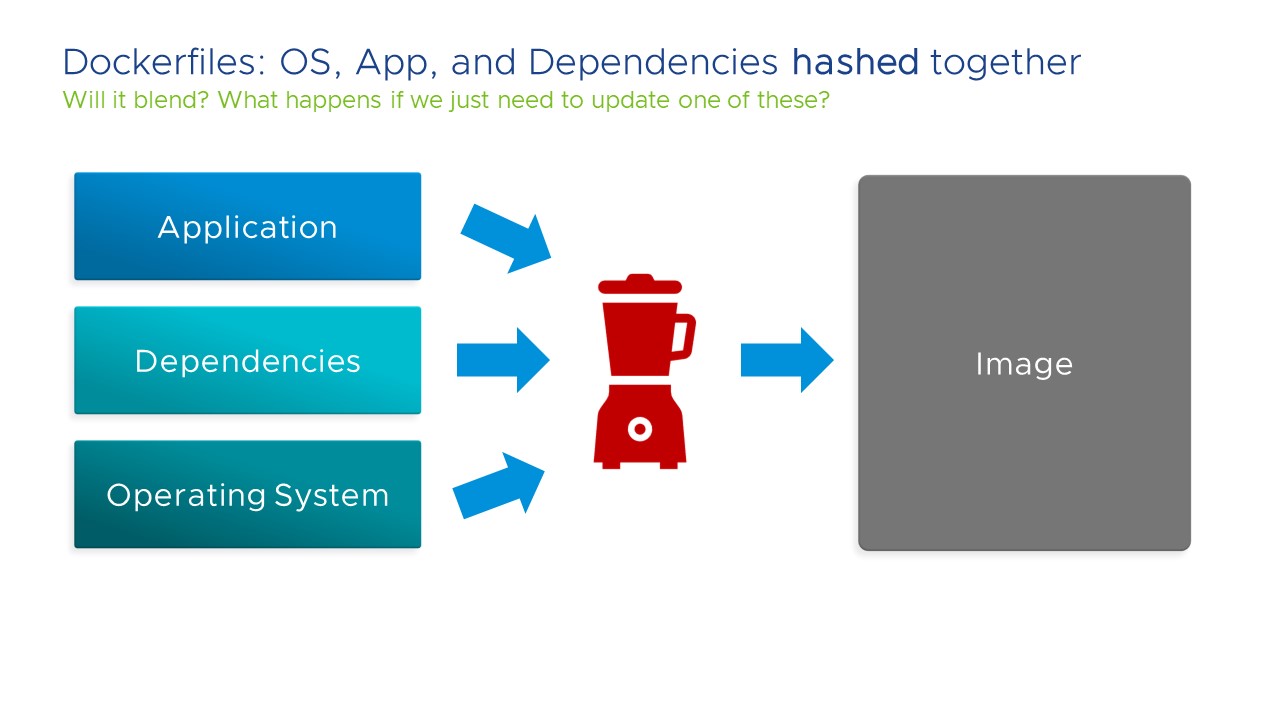 I want a OCI build tool that separates, at the very least, the operating system from the application. I want to be able to swap out the OS without breaking, or even affecting, the application. This is because if there is one thing that we can depend on in IT, it’s that the OS will have security issues, ie. CVEs, and we’ll need to fix those CVEs to remain secure. However, if the application, and its dependencies, and its runtime, and the OS are all hashed together into a container image, and we can’t swap any one of those without affecting the other layers, then that is a major security issue, as development and/or application operation teams will be (very) hesitant to update the image because they don’t know what will happen to the application.

An easy way to test if this capability is available in an OCI image tool is if we can use it to build an image “out of band” from the build pipeline. Can we update the OS of an image, most likely to fix any CVEs or bugs, and roll that image out to all applications that use it, without having to go through the entire application build pipeline? In most situations that would not be possible because the build pipeline and the images are so tightly intertwined that it is not feasible. But it should be.

There are other things that a great OCI image build tool should have. I’ll list a few here, but I don’t want this post to go on for too long. (I may tackle these in a future blog post.)

I think that Buildpacks–and more specifically Paketo–present a solution to many of the problems organizations will encounter when trying to build a secure software supply chain using container images.

With regards to my two main points:

Using Pack and Paketo Buildpacks (but not Dockerfiles)

I would say that Paketo is a project that uses Buildpacks to provide container images that can run anywhere, including Kubernetes. As well they support many language runtimes. I would almost consider Paketo a distribution of modern, well-considered, usable, community generated buildpacks that have taken what buildpacks have done and built upon it, by making them even more composable and modular.

For the purposes of this post, I’ll use Paketo Buildpacks to build apps which target Kubernetes.

Pack is the tool that actually generates the Buildpack images so let’s use pack to build a container image.

First, install pack which can be used to create buildpack based images. I’m doing so on Linux.

Now I’ve got the pack cli.

Next, build an app. First checkout the sample.

NOTE: This is pulling Java dependencies, and, well, there are many of those to pull on the first build.

That’s created this “applications/maven” image in my local Docker.

NOTE: It says 41 years ago because it is a reproducable build. More on that maybe in other blog posts.

But where is the Dockerfile?

There is none! pack uses buildpacks and does NOT use a Dockerfile. Nice!

Most customers I talk to have to push an image through the entire build pipeline to build it…where “it” is the OS, dependencies, and application artifacts. This means that any time there is a CVE, the entire build must be run. What this also suggests is that the ability for the application to properly run is also tied to the entirety of the image. This makes updating images when there isn’t an application change challenging, as no one is really sure if it’s going to work or not…

Rebase allows app developers or operators to rapidly update an app image when its stack’s run image has changed. By using image layer rebasing, this command avoids the need to fully rebuild the app.

The term rebase mostly comes from the world of git:

Rebasing is the process of moving or combining a sequence of commits to a new base commit. – git rebase

So let’s rebase the image.

Rebasing using a much older image. Of course, this would be done in reverse in the real world, where we would rebase with a newer image (that presumably has the security issues fixed). But for simplicity, given I’ve already created an image using the most recent run image, I’ll go backwards here just for fun. Same idea no matter which way we go.

If I run that app, which was rebased onto a much older run image…

So as you can see it’s simple and fast to “rebase” an image, ie. swap out the version of the OS but NOT the application, without having to go through an entire build.

I should mention that buildpacks and pack are just part of a full solution for managing images. Please check out kpack and the Tanzu Build service for more thoughts on what else is needed in the Kubernetes ecosystem. More on that in future posts.

Please note that the container flipping image in the title image is borrowed from the ko project. I’m using it because I think it’s hilarious, not because I necessarily am suggesting ko is a great build tool–I haven’t used it.