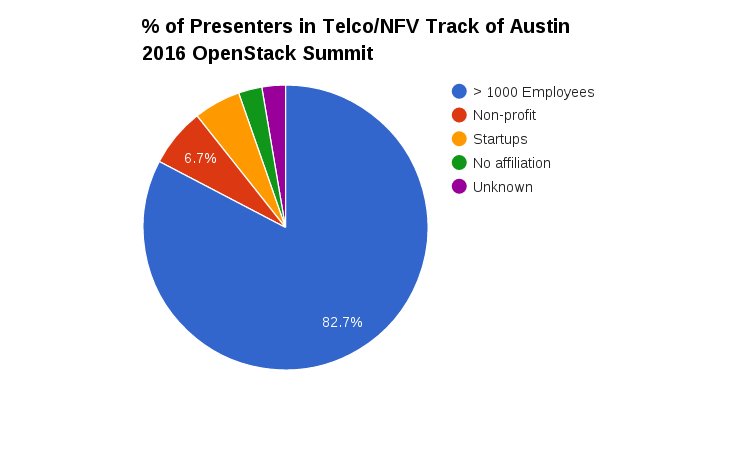 I went through all the presentations in the Telco/NFV track at the summit to find out what companies were presenting, and how many presenters each had.

Please note this is not a scientific look at the numbers by any stretch of the imagination:

Some basic numbers on the presentations. 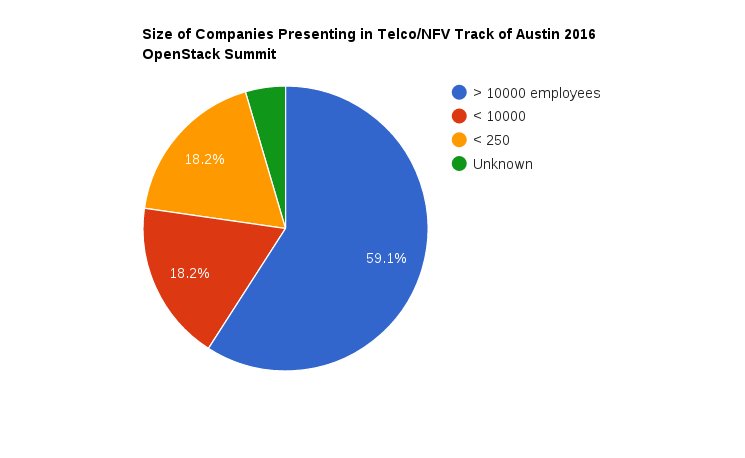 The topics are fairly varied. I was hoping to be able to categorize them, but it does seem diverse, at least within the NFV realm.

Below are some keywords I pulled out of the blurb for each talk.

Some of them were mentioned more than once, such as OPNFV, service chaining, and technologies like SR-IOV/CPU Pinning/NUMA/Huge Pages. Multi-site or distributed was mentioned a couple of times. Both OpenStack and OPNFV have ongoing Telecom/NFV related projects such as Congress and Tacker as well as Doctor that should be well represented.

Below is a table of the larger companies and how many people each employs. It’s a considerable sum of over two million employees! That’s a lot of people.

Again, more than two million employees represented from all over the world. Amazing stuff.

I’m amazed at how large these companies are. As someone who is employed at a small company that works on NFV projects, I’m not sure what to make of this. Either small companies don’t submit presentations, or they are not accepted. Is NFV only important to large Telecoms? Are the only telecoms interested in OpenStack very large companies? Do small telecom companies even exist? Will they in the future? Who are the people working on NFV in these companies…are they large teams or small, R&D type groups? Do smaller companies help telecoms to deploy OpenStack-based NFV solutions?

On one hand, the results are somewhat obvious: the majority of the companies doing presentations at the OpenStack summit on NFV related topics are very large because telecoms are very large. But on the other I’m surprised there aren’t more startups and the like in this mix. There is so much work to be done–so much software to be created–that there is, I believe, considerable opportunity. Perhaps this says something about the ability of a small company to able to participate in the OpenStack ecosystem.