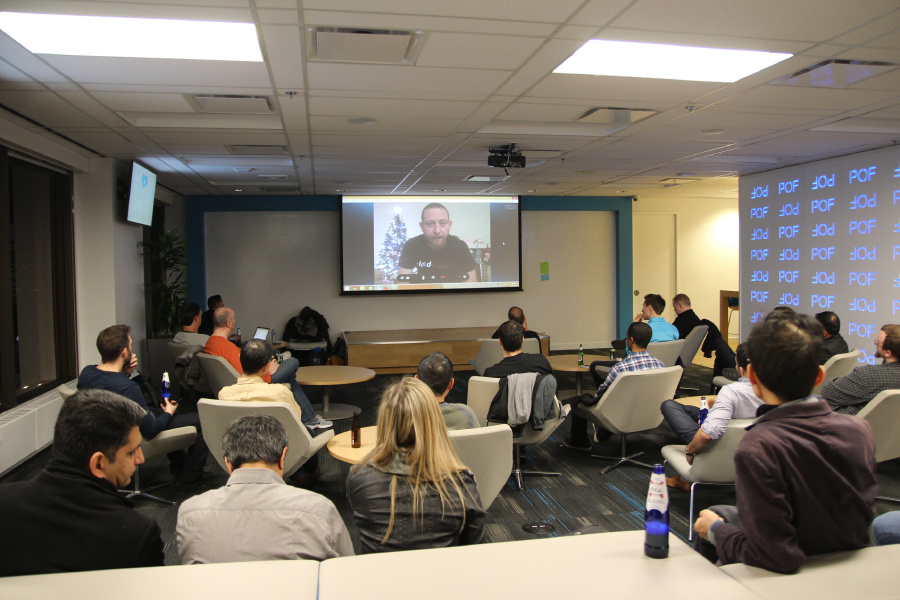 (openstack meetup at the plenty of fish “aquarium”)

Last week I was lucky enough to be in Vancouver for the inaugural Vancouver OpenStack meetup, sponsored by Auro and Plenty of Fish, as well as a pre-planning session for the Vancouver Ansible meetup.

The first Vancouver OpenStack meetup was fun and had a good turnout.

Being from Edmonton, where the tech community is a bit smaller, I would have been happy with a few people. In fact that last AWS meetup I went to in Edmonton had about four people, and I don’t really use AWS at all. I think there was about 30 people in attendance at the Vancouver meetup, so that is a great start.

Unfortunately one of the speakers had to cancel on account of illness, but we still managed to fill up the time with a presentation from Sean Winn of EMC/Cloudscaling as well as from Auro’s Matt Mckinney.

Sean gave an introduction to OpenStack, discussed how to contribute code, and also how to find a career related to OpenStack. (I’m hoping contributing has become easier because about 18 months ago someone spent six hours helping me through the process of getting setup in the workflow and we still didn’t complete it.)

Matt discussed the results of the recent OpenStack User survey and what the results might mean for OpenStack users. His slides are here. What I got from the survey results is that OpenStack is being used in production more and there are still several pain points in doing that, especially around networking.

Given the next OpenStack summit is in Vancouver, it’s good timing to get the OpenStack meetups going.

Again, being from Edmonton, I’m not sure we could even support an Ansible meetup right now. But there were seven or eight people just at the Vancouver pre-planning session, so that was great.

Part of the planning was deciding where to host the event, and luckly Vancouver has several companies and organizations that have good social spaces for this kind of meetup. In fact it’s almost becoming common for some of the larger startups to create a social space for events like this, eg. Hootsuite, OpenDNS, Plenty of Fish, etc.

Once the planning session was over some of us hung out for a bit and just talked about technology, which is something I don’t actually do very much. We talked about all kinds of things, such as how FreeBSD might be due for a renaissance, about how SmartOS is actually pretty cool and probably doesn’t get used enough (Joyent open sourced their data center management tool as well), and a several other technologies. Also, pretty much every operator is in awe of Brendan Gregg.

I also tried to get the group to call the meetup the “Vansible meetup” but I don’t think that was generally accepted. :)

While I will be in Edmonton most of the time I hope to make it out to a few of the Vancouver OpenStack and Ansible meetups over the next while.

I think Calgary will be having an OpenStack meetup sometime in January, and I will likely make the three hour trek down to attend that too.