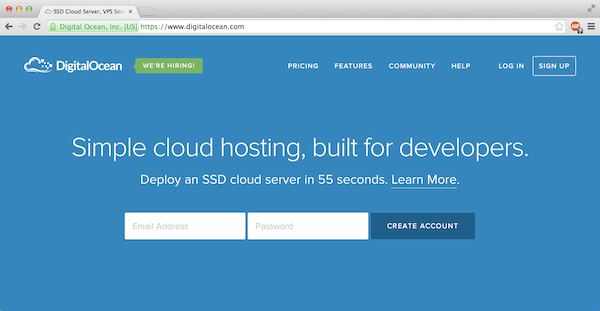 Even though I have worked a great deal with OpenStack and various virtualization technologies, I haven’t really used infrastructure as a service all that much. Being Canadian has made using Amazon Web Services unlikely as I normally work at organizations that have concerns (justified or not) about their data staying in Canada. Usually that means AWS is off the table. I’ve used Rackspace a bit to test out their Rackspace files product which is based on OpenStack Swift and I’ve also used Heroku to deploy a hubot, but that’s about it.

Digital Ocean (DO) keeps popping up in my RSS feeds, so I thought I’d give it a shot. From what I’ve read DO is a simplified IaaS provider that also separates itself from the rest of the pack by its use of only solid state drives–no spinning rust here. While I believe Rackspace now provides all SSDs, DO was kind of the first to really market themselves using SSDs (at least the first I was aware of at any rate).

I mention the word “simplified” above. This is another way that I believe DO is distinguishing itself from other IaaS providers–a simplified web interface, possibly a simplified product offering, and easy to understand pricing.

The sign-up is very straight forward. Nothing but an email and a password. I don’t think a second field to verify a password for a new sign-up is necessary, especially given how passwords can usually be reset with a link in an email, so the fact that DO only has one password field seems smart to me. Also the fact that the sign up is on the front page is telling.

The first thing I wanted to do is find out what Operating Systems they support for virtual machines. I’m sure they support all the standard OSes, but the sysadmin in me wants to go to that page first. However, as far as I can tell I can’t see that information without putting in a credit card first. So I enter my credit card info.

I’m definitely enjoying the simple web interface. I think there is a lot of room in IaaS to provide a very simple web gui. I think DO is doing a smart thing here, courting developers, simple web interface, simple usage, relatively low cost, and SSDs. AWS has tons of features and products that are difficult to understand, and what’s more, it’s hard to figure out what your bill is going to be (though again, I haven’t used AWS much). 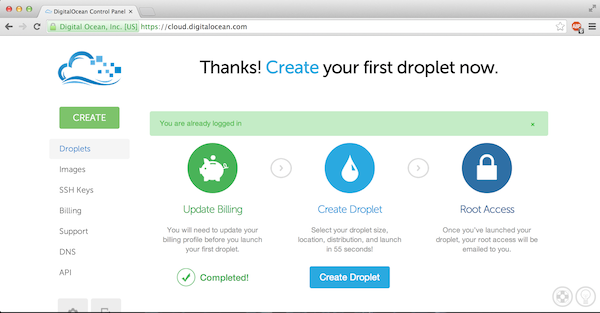 There’s not much going on in the sidebar. Just:

Most of these concepts are going to be in every IaaS provider. Create a virtual machine/instance/droplet. What instances do I already have running? What images can these droplets be based off of? What SSH keys are automatically added to the image when it’s booted? (Most IaaS providers inject an SSH key into the virtual machine and also turn off SSH password access–only access using SSH keys is allowed at first to remove the ability of bots to break the password and login.) 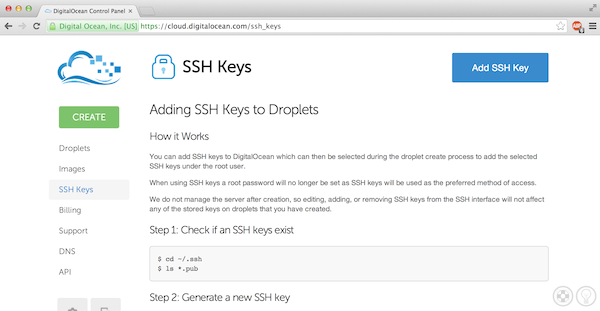 Surprisingly I can’t just upload the file I have to paste it into the text box. Sure. Once I do that it shows my key in the SSH keys list. 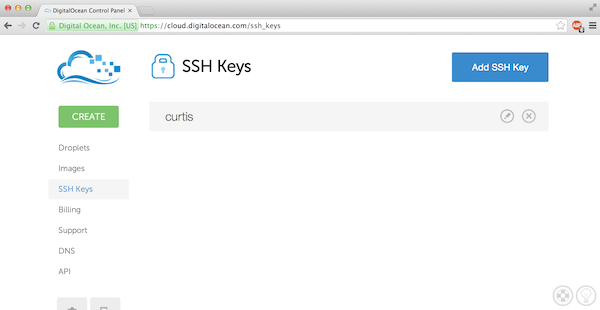 Now I’m going to guess that having entered my CC information, and having uploaded at least one SSH key, I can now boot a droplet/vm/instance.

But I don’t want to do that with the web gui, because I don’t really like to use gui interfaces. Looks like I need to find a command line application that can use the API that DO seems to have…

So I google search for “digital ocean command line” and below are some of the results. Looks like there is an command line app called “tugboat.”

Let’s get that. The github README for tugboat says “gem install tugboat.”

I noticed that during the install a digital_ocean gem was brought down too:

I’m willing to bet that DO provides that gem, and Ruby code can take advantage of it, just like tugboat.

Now I’ve got a tugboat command.

Here are all the commands tugboat provides:

Oops, looks like I could have added my key with tugboat. Oh well.

The tugboat README says use “tugboat authorized” to setup the API information to allow tugboat to access the DO API using my credentials.

Note that I found my API credentials and keys in the web gui under “API.”